Can the super hyped Nord compete with K20 Pro?

OnePlus had recently launched its OnePlus Nord starting at ₹24,999/- and entered into the mid range segment after five years. And Redmi also had it’s previous flagship at the same price now.
OnePlus Nord is a pretty solid phone with the 5G capable Snapdragon 765G, 90Hz AmOLED Display and having the main advantage of Oxygen OS.
Redmi K20 Pro on te other side has the previous top notch chipset, Snapdragon 855 and all its flagship features from Xiaomi.

Both the devices are built on Metal and Glass Sanwich design. Both Nord are K20 Pro physically very sturdy, however the Nord is the little slimmer than the K20 Pro.
Nord has a plain back, whereas the K20 Pro has a cool designed back. Although design is sceptical from everyone’s perspective. Both the devices are available in various colors.
Redmi K20 Pro: Carbon Black, Flame Red, Glacier Blue.
OnePlus Nord: Blue Marble, Gray Onyx.

Although, both the phones are equipped with the AMOLED Screens, OnPlus Nord has an edge with its 90Hz fluid display and the 20:9 aspect ratio, which makes it easier to hold the device in hand. If, you’re the fan of full screen display and concerned about security, pop-up camera in the K20 Pro would fulfill your need.

The most happening processor these days is Snapdragon 765G as NORD, Pixel 4a and other major devices are coming with 765G, But still Snapdragon 855 is better that 765G except 5G support. 5G support for the next 2 years is like a myth. Although OnePlus is packed with a 5G chipset, 5G in India isn’t practical as of now. While talking about performance, K20 has always an edge with it’s Snapdragon 855. In the graphic rendering perspective Adreno 640 in Redmi K20 Pro is a beast and is miles ahead of Adreno 620. Snapdragon 855 is a flagship chipset, whereas the 765G is a mid-range chipset.

Why is the Nord’s 6GB RAM variant unavailable right from launch? Is it just for the higher Benchmark Scores and increase the hype, which is only possible for 765G + 8GB but not 765G + 6GB.

Redmi K20 Pro is the clear winner in terms of performance.

OnePlus Team had hyped the Nord Camera, as if it is incredible. But the bitter truth is that, it is same sensor that is present on the under 15k Redmi Note 7 Pro and 7S phone. The Redmi K20 pro camera Exmor-RS CMOS sensor is too good for detailed photography and of flagship grade.

Do you know?: Wide angle camera is capable of creating the bokeh effect(potrait mode/depth mode). But, what is the need of depth sensor OnePlus?

OnePlus Nord is packed with the Oxygen OS based on Android 10 and the Redmi K20 Pro with MIUI 12 on top of Android 10.
If you like the stock Android type of operating system, Oxygen OS is the one for you. OnePlus gives a minimum of two major Android updates for their devices.
While the K20 Pro works on MIUI which is built on top of Android. Even though it’s an old device MIUI updates support will be there for next 3 years upto MIUI 12 which makes it more worthy. Recently MIUI 12 has been came to K20 series within 2 months of release. There are some features like video settings pane and custom Ambient Display, which no vendor has given such an extent of customization in the industry.

Redmi K20 Pro has an edge over the Nord with the 3.5 Headphone Jack for latency free gaming and ease of convinience.

Although, OnePlus marketed the Nord as the incrdible mid-range phone, there’re a lot of caveats. The Redmi K20 Pro had ticked some of the incredible specs, whereas the Nord ticked some other great specs but intelligently which make you feel like a great phone.
When to choose OnePlus Nord: 90Hz Refresh rate, 5G 😆, Slimmer Phone, Oxygen OS, Ultra wide front camera.
When to choose Redmi K20 Pro: High Performance, Full Screen display, 3.5mm jack, cool MIUI features, Good camera. 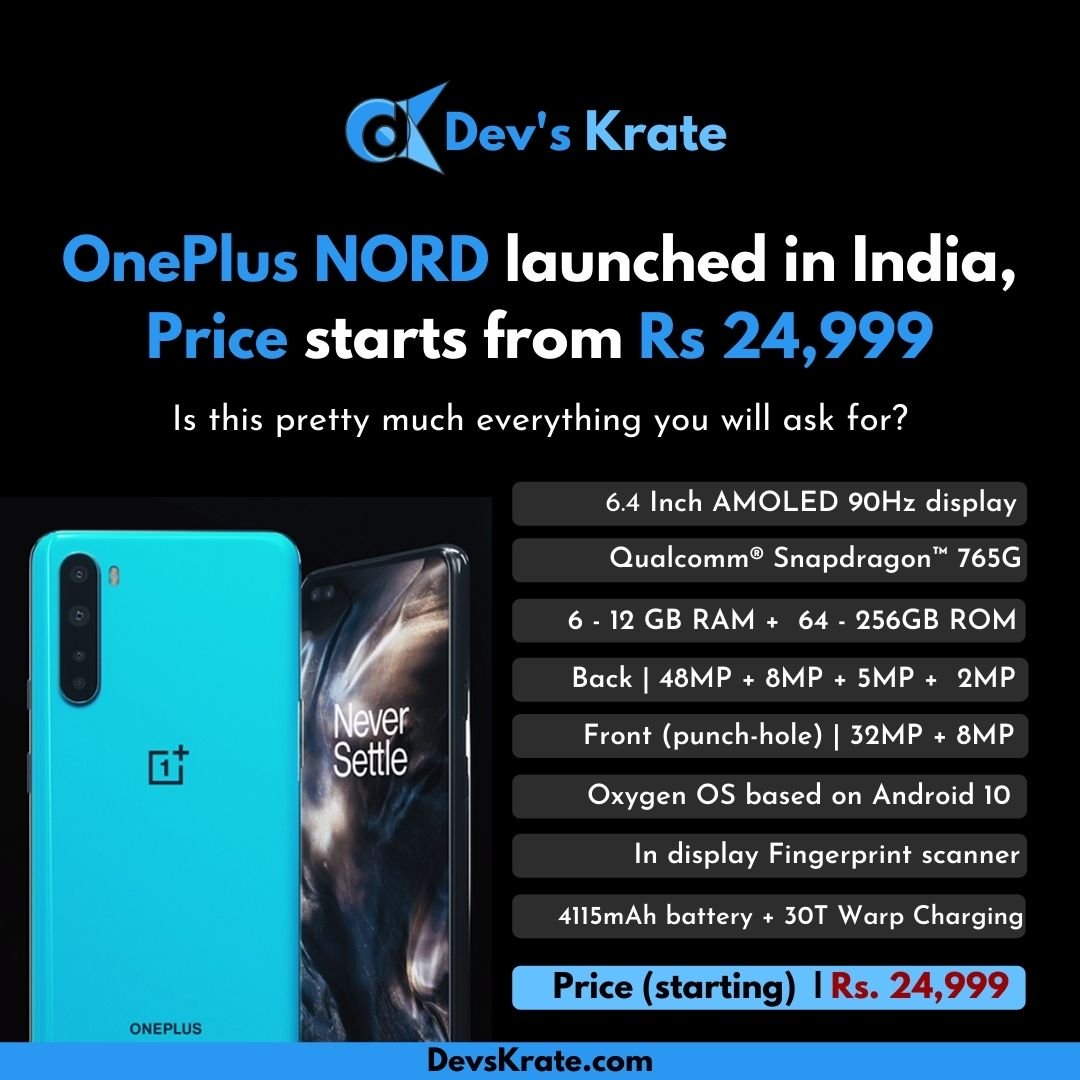 #android #oneplus #redmi #always-a-flagship
Why don't you read something next?